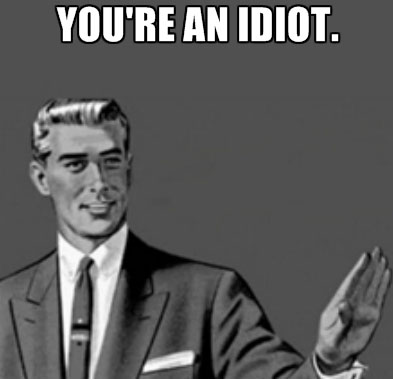 Although Logic was not my favorite class in college, one lesson stayed with me: the logical fallacy of argumentum ad hominem. Since it is being used repeatedly in the current Presidential primaries, I thought it would be useful to remind us all what this fallacy is. (Ad hominem is short for argumentum ad hominem. It is Latin for “to the man” or to the person”).

The candidates argue ad hominem when they attack opponents (for example, calling them losers, liars, idiots, or disasters) without responding to the actual positions or ideas of their opponents. Although this might demean or intimidate opponents, it does not invalidate what opponents are saying. It is a logical fallacy.

To put it another way, it is illogical to attack anyone’s character in order to refute his or her ideas. It does not invalidate their points of view. Whatever their character might be it has nothing to do with the legitimacy of their perspectives.

Arguing ad hominem is an effective way to divert people’s attention from the merits of what someone is saying, divert a speaker from the point they are trying to make, and turn a conversation, a debate, or a meeting into a food fight. It is fighting dirty.

There are at least two ways to argue ad hominem. First, you can call people abusive names. We’ve seen a lot of this during these primaries. Second, you can dismiss someone’s ideas or perspectives based on some irrelevant fact or supposition about them. Here is one of my personal favorites: “Einstein could not have been right about relativity, just look at the way he combs his hair.”

Although the use of this fallacy might not be as blatant at work or in meetings in our communities as it is in the current political arena, it is definitely alive and well, albeit in more subtle ways.

Consider how you might dismiss or argue against people’s positions or ideas based on something unrelated to what they are saying, such as your judgments about them or some other unconnected trait like their citizenship, gender, race, ethnicity, class, or sexual orientation. At work, we might also dismiss others’ ideas simply because they don’t work in the same function we do. For example, we might think (or even say aloud), “How could they possibly know anything about marketing? They work in manufacturing.”

I encourage all of you to do two things between now and November. First, listen for ad hominem arguments from the candidates. If they continue to argue fallaciously, you might wonder about their ability to conduct themselves logically should they be elected. Second, at work and in your communities, monitor your own inclination to dismiss the soundness of others’ ideas and points of view because of qualities unrelated to their verbal contributions. Listen attentively to consider the meaning and value of what they are offering. Let’s not follow suit with the behavior of the candidates: let’s avoid the logical fallacy of argumentum ad hominem.