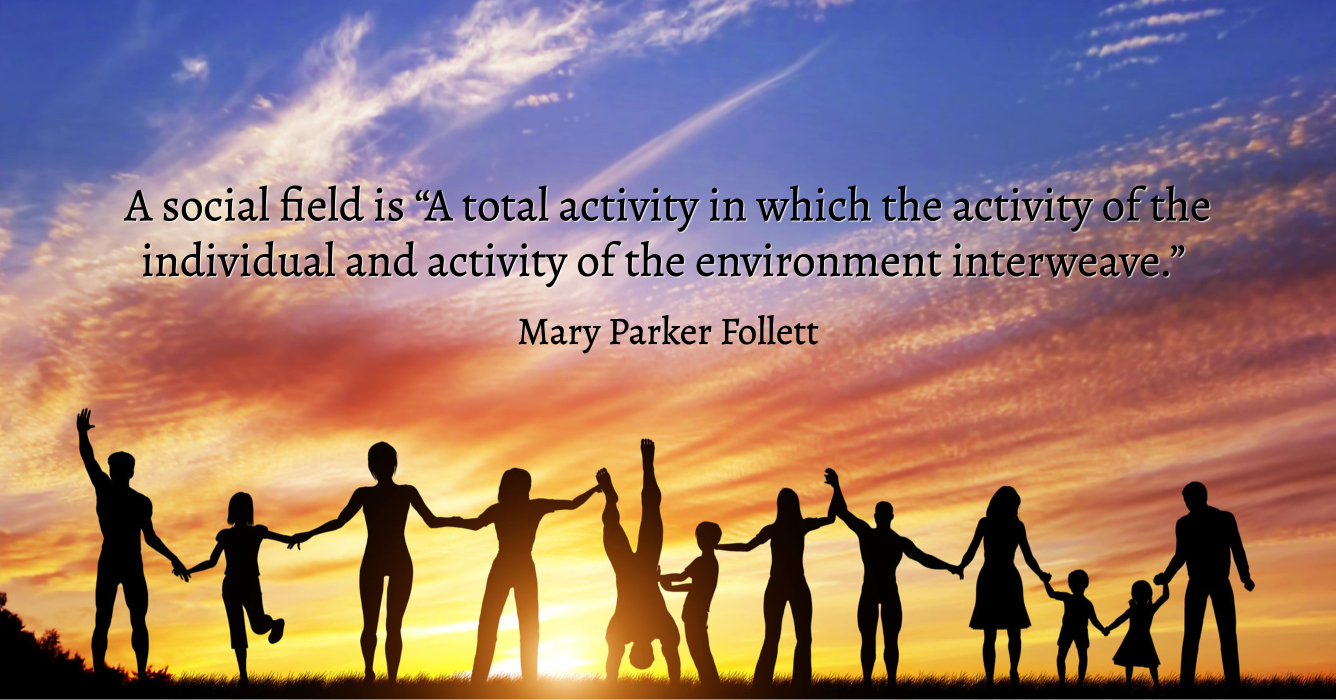 “Every feeling, thought, movement, and encounter is simultaneously an inner and outer event.”

Alan Briskin and I are working on a book about “fields.” I have written several previous posts about them. The map to this territory is becoming clearer and more detailed as we, along with David Sibbet, Gisela Wendling, and Karen Buckley, share our ideas about and experiences with fields. We are also investigating the work of those who have explored social fields before us like Mary Parker Follett, Kurt Lewin, Pierre Bourdieu, and Otto Scharmer. The following piece is an adaptation of writings and conversations between Alan and myself.

As noted in my previous post, Alan Briskin and I think of a “field” as a dynamic, living series of perceptible forces emanating from multiple sources inside and around us that influence how we feel, think, and behave. Field phenomena include everything from how you feel with good friends, to social customs and group norms you might take for granted, as well as  conflicts that arise among competing factions. When we think of them in this way, fields are everywhere, within a person via interactions of brain, mind, heart, and body activity, as well as among people, ideas, social institutions, and physical forces. As you can see, fields are networks of interacting relationships, some more evident than others.

Why the heck do fields matter? Especially if we can’t see them. They matter because in so many ways we are unconscious of the fields that influence and manipulate us. We are not aware enough of what they are or how they operate or  or how we might influence them for positive ends. We were born into unique social fields within our own families. These enveloping fields influenced us as children in ways that we only slowly became conscious of as we grew older. Their characteristic nature became more familiar as we experienced the fields of other families, helping us become aware of differences with our own. This is true of organizations as well.  One year I consulted with an automobile company in Detroit, a Catholic hospital in Kansas City, and a spiritual organization in California. The social fields in each of these situations were dramatically different and shaped people and their interactions in dramatically different ways.

Through these posts and ultimately in our book, Alan and I hope you and others will become aware of fields, their impact on you, and on those around you. The ability to be aware of fields, their presence, emergence, and dynamism, is a crucial skill for intentionally and skillfully perceiving, interacting, and leading. To help us become more aware and discern how fields influence us, we are exploring three types of fields: personal, social, and noetic. Even though these fields are always interacting and influencing one another, I will consider them separately. My last post was on personal fields. Here I explore the social field.

It’s challenging to describe the social field since it includes so many things, almost everything PLUS the kitchen sink. Although it includes the influence of the personal field, it operates on a different scale and contains forces and information specific to it. Many smart people on whose shoulders we stand have been exploring this terrain for decades. These include Mary Parker Follett (1868-1933), Kurt Lewin (1890-1947), Pierre Bourdieu (1930-2002), and more recently Arnold Mindell, Lauren Artress, Peter Senge, Joe Jaworkski, Adam Kahane, and Otto Scharmer.

Building on the work of these thought leaders, we conceive of the social field as a region or zone permeated by interpersonal, group, and mass aggregates of human relationships. It includes the sensory dimensions of the people involved including what they see, hear, taste, touch, smell, feel, think, and do. It contains the rules and boundaries that shape what happens among people in groups such as motives, norms, processes, and structures. It contains less visible aspects as well that are only known from deeper reflection and astute observation, such as shadow dynamics and deeply held prejudices. The social field includes physical aspects like buildings, meeting rooms, artwork, and natural settings that reflect and echo the past and affect the present and future. Finally, forces that are part of social fields also include habitual patterns formed over decades and centuries in economic, political, institutional, cultural, religious, and psychological domains.  The guiding questions when investigating fields are what is it I still cannot see and what is it I still don’t know?

As we did in the previous post on personal fields, let’s use David Sibbet’s Four Process Flows* to unveil the social field in groups and in larger, encompassing the social field. First I will pose questions regarding groups.

QUESTIONS TO UNVEIL FORCES IN GROUPS

QUESTIONS TO UNVEIL FORCES IN A LARGER, ENCOMPASSING SOCIAL FIELD

Reasons to Unveil Forces in the Social Field

There are at least two reasons for unveiling the forces in a social field.  First, becoming aware of forces driving people’s behavior, usually outside of conscious awareness, allows you to surface them, make them public and available for investigation.  Second, making the forces public means people can be more conscious and intentional about their behavior. They can better align what they do and say with their intentions.

You don’t have to perceive or understand all the forces in the social field. That’s impossible. However, we can begin to unveil some of the forces and bring them into awareness so they are not driving people’s behavior unconsciously. This is how we align behavior with good intentions.

*The Four Process Flows were adapted by David Sibbet from the work of Arthur M. Young.