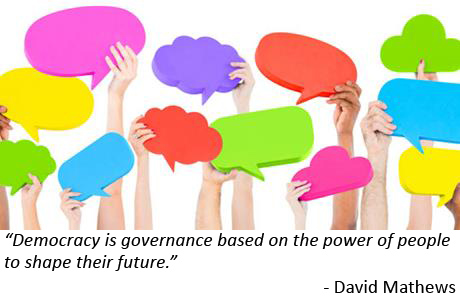 Engaging citizens in making decisions about their communities, cities and towns is the heart of democracy. “Citizens…are members of the broad public within a jurisdiction or affected by a particular decision.” (Kahane, et al) Although voting for candidates or referendums is an important part of democracy, it is or should be only a small part of it.

Here are three of the multiple challenges to effectively engaging citizens in making decisions. First, there is the tension between career civil servants and political appointees or elected officials. The latter two groups often do not appreciate the knowledge and experience of civil servants who know what it takes to implement policy. Conversely, civil servants often do not appreciate or respect the political exigencies in which the “electeds” or “appointeds” are operating.

Second, all three groups are wary of engaging the public. They might choose to avoid it if they were not mandated to do so. According to a recent survey in California of 900 elected and administrative municipal government leaders, 69 percent perceived that “community members have become much angrier and mistrustful of public officials in recent years.”

Third, the ability of governmental bodies to engage citizens in decision-making is limited. According to the same survey, 69 percent of those surveyed believe that “a lack of resources and staff could stand in the way of a deliberative public engagement approach.” My experience is that they often also lack the knowledge and skills.

Given that the issues facing our communities and jurisdictions seem to only be escalating in complexity, it behooves us to find our way around or through these three challenges. Figuring out how to meaningfully and effectively engage citizens in planning and public policy decisions is critical to making sure that the decisions are sound and implementable.

The first step is for elected officials and administrators to carefully determine the level of engagement needed to make high-quality decisions that get executed. The criteria to consider include the potential impact of a decision, a plan or a policy; the buy-in that will be needed to successfully implement it; the information and expertise needed to help make a good decision; the level of polarization among citizens that already exists or could be evoked; and the kind of relationship they want to develop with the public.

Here is a spectrum of options for elected and governmental leaders that roughly parallel the ones I outlined for organizational leaders in last week’s blog.

Option # 2, gathering feedback on proposed decisions, usually involves traditional methods such as public hearings, citizen advisory councils or public comment periods. None of these encourage or enable citizens to consider issues with people of diverse opinions and experiences. They don’t allow areas of agreement to surface nor citizens to develop collective recommendations. If the impact will be great and buy-in from the public essential, then options # 3 (gather input) or #4 (collaborate with citizens) are the way to go.  They get us closer to what I think of as “community democracy.” Citizens working with citizens, and with “electeds” or “appointeds,” to solve difficult issues together.