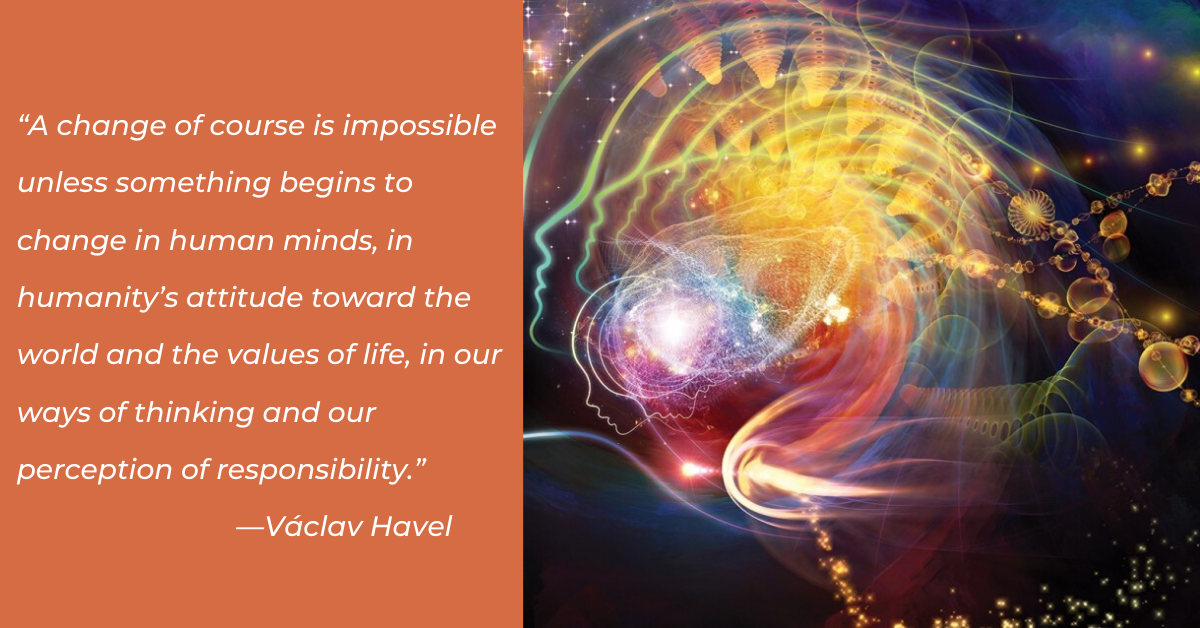 A note from Mary: This post is longer and more dense than usual. I am exploring some big questions so please hang in with me and read through the whole piece. I would so appreciate your sending me your questions, comments or suggestions.

Last Saturday night, my husband, Roger James, and I watched the last episode of HBO’s five-part mini-series “Chernobyl.” It tells the story of the nuclear accident that occurred on April 26, 1986, in the Chernobyl Nuclear Power Plant in the north of the Ukrainian SSR. The accident led to the deaths of thousands and poisoned the surrounding earth for generations to come. As the last credits rolled off the screen, we sat in silence. I was on the verge of crying or screaming in grief and rage.

I wanted to blame the accident on the plant supervisor who was treating the staff on duty so brutally. That would make it simple. But I know better. The series illustrated the awful things that can occur when people ignore the social fields shaping people’s behaviors.

In my Oct. 30 post “That Which Is Unseen…” I described three elements or dimensions of social fields:

(2) the context or circumstances in the background; and

(3) the culture of the organization or community in which an interaction is occurring.

Many of the characters in the series ignored all three dimensions: the context of working under a prideful, authoritarian regime; the culture that demanded compliance with Communist Party policies and, finally, the internal states of fear and anger in people expected to hide mistakes or blame others for them. This toxic combination, in addition to hiding the truth about the faulty design of the plant itself, led to this disaster.

In this post, I’d like to discuss an important fourth dimension of our social fields—the human mind.

The disaster at Chernobyl happened over 30 years ago, but one look at current events will reveal that not only does solving tough issues continue to elude us, but also that impending disasters continue to worsen and multiply.

We must consider a change in the human mind and our view of life. This was the rallying cry from Václav Havel, playwright, dissident, and human rights activist, who, after the fall of communism, was elected president of Czechoslovakia in 1989.

Fields are powerful forces in our lives at work and in our communities, and the human mind is an important contributor to social fields. Although they might not lead to consequences as horrifying as the accident at Chernobyl, they do affect us just as we affect them every moment for good or ill.

If we don’t see or examine the social fields we are creating and operating in, it shapes what we do and say outside our awareness. In other words, we are not making conscious choices about the kind of field we want to create to help us work together to solve serious problems.

While extremely powerful, these social fields are malleable. But we can only change them if we can see them and notice what each of us is contributing to them. What is your perception of your responsibility for your emotions, thoughts and body sensations? How about the context and culture in which you operate?

You have probably heard someone say something like, “You make me so mad (or happy, sad, afraid, etc.)” There is some truth to this. If you are angry, happy, sad, or afraid, other people’s bodies and brains will either start to mirror these emotions or react to them. For example, when someone is angry, you might feel afraid. This process is called emotional contagion. If you are angry or frightened, even if you are trying to act as if you are not, others will likely start to react to these emotions, albeit unconsciously. Anger and fear seem to be the most contagious emotions.

That said, we don’t have to be prisoners of the resonance circuitry in the brain that creates contagion. We can use our minds to train our brains. Just as social fields are malleable, so too is the human brain. Through a process called neuroplasticity, we shape the pathways in the brain through what we pay attention to. For example, taxi drivers in London have larger than normal hippocampi, the brain structures instrumental in learning and memory. A taxi driver’s hippocampus grows larger because they have to pay attention and eventually memorize some 25,000 city streets.

We can use our minds to train our brains to help us notice what is going on inside and around us so that we are better positioned to create generative social fields. For example, when interacting with colleagues, neighbors, or government officials, you can develop your ability to pay attention to:

Using the Mind to Train the Brain

Meditation is one effective approach to developing the ability to pay attention to all four of these areas simultaneously. It changes the networks and functions in the brain. Research indicates that by practicing mindful awareness regularly, you develop your ability to be aware of what you are paying attention to in any circumstance. This is called meta-attention.

Meta-attention enables you to shift your attention in ways that can help you change your brain for good. For example, shifting your attention from obsessing over minor transgressions to feeling gratitude for being able to work with others to achieve something meaningful.

I believe developing and taking responsibility for these four areas of attention will contribute to “a revolution in the realm of the human mind.” As temperatures rise in our actual and proverbial nuclear reactors, such a revolution might foster the social fields that enable us to avert impending disasters by changing our ways of thinking and our perception of our responsibility to the world and the values of life.

A note about the quote: Václav Havel was elected the President of Czechoslovakia in 1989 and the first President of the Czech Republic in 1993. This quote was taken from a speech he delivered before the Latin American Parliament in Sao Paulo, Brazil, in Sept. 1996.

3 thoughts on “The Fourth Dimension of Social Fields: The Human Mind”