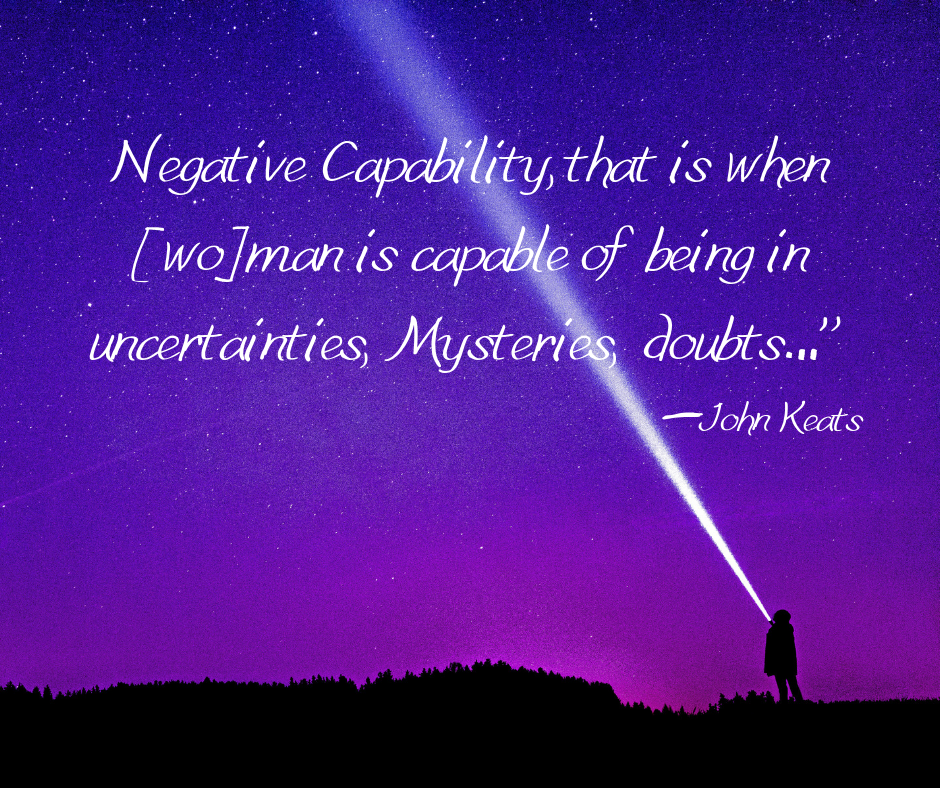 John Keats, English Romantic Poet, wrote about “negative capability” in a letter to his brothers George and Thomas in 1871 when he was 22 years old. I read this letter nearly a century later when I was 22, an undergraduate majoring in English literature. I understand this oxymoronically-named ability today in ways I could not have then.

It’s likely that Keats use of this terms was influenced by his studies of medicine and chemistry; and that when he identified a “negative” capability he was referring to the negative pole of an electrical circuit in which electricity flows in one direction: out of the positive terminal and back to the negative terminal. In this way, the negative is receptive.

In today’s context I think of negative capability as the ability to be receptive to and tolerant of the discomfort of not knowing, and of holding multiple, seemingly conflicting ideas or perspectives simultaneously. In other words, not grasping for certainty or jumping to ready-made answers simply to assuage the anxiety that arises in ambiguous and uncertain situations.

As American writer F. Scott Fitzgerald once declared, “The test of a first-rate intelligence is the ability to hold two opposed ideas in mind at the same time and still retain the ability to function.”

Insist on a humane pace and periodically pause to reflect. Include in your ground rules for meetings something like, “Keep the pace of the meeting humane and spacious. Take moments for silent reflection.” Periodically ask people to pause, observe their breathing, sense their feet on the ground and their seats in the chairs, and pay attention to their internal state. This alone can help people create the space inside to be receptive to others’ perspectives.

Practice suspension. Step back from positions and judgments, especially strongly held ones. Hold them in suspension so that you can reflect on them. When someone takes a position or makes a judgment, ask, “Is this true? How do you know? How did you come to see the situation this way? Or, ask “What assumptions are we making? Are these true? How do we know?”

Be vigilant about sliding into cognitive biases. We all have biases. Unfortunately, they tend to get amplified when we feel frightened in uncertain situations. One particularly unhelpful one is confirmation bias in which people pay attention only to opinions and information that confirms their current positions and beliefs. Also known as cherry picking information, confirmation bias is the exact opposite of negative capability.

Practice negative capability in calm waters. It is hard for any of us to hang out with uncertainties, mysteries, and doubts. It is even harder when the topic is close to our hearts and we are attached to a particular solution. Practice hearing and holding different and apparently conflicting perspectives when the stakes are not sky high and the interaction is at least civil if not friendly. This will position you to tap negative capability reservoirs when you or the group enters white water and you need to slow the pace, ask people to pause and reflect, investigate their positions and assumptions, and avoid sliding into cognitive biases.