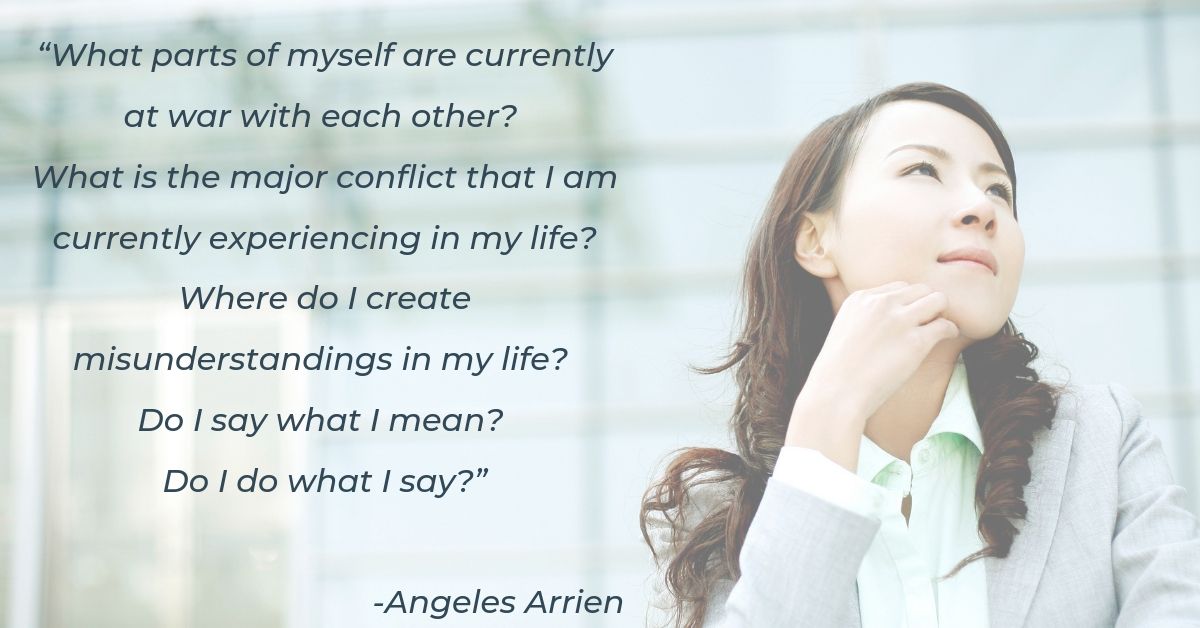 We are receiving more requests to facilitate “difficult conversations” this year than in previous ones. We don’t know the cause. Perhaps it’s the national political climate that has people more on edge. One common denominator in many of these conflicts is people NOT saying what they mean or doing what they said they would do.

According to Angeles Arrien, these are two major sources of conflict. In her bestselling book The Four-Fold Way: Walking the Paths of the Warrior, Teacher, Healer and Visionary, Arrien writes about conflict and asks, “What parts of myself are currently at war with each other? What is the major conflict that I am currently experiencing in my life? Where do I create misunderstandings in my life? Do I say what I mean? Do I do what I say?”

How might any of the conflicts you are experiencing internally be the result of these two causes: not saying what you mean or not doing what you say?

We might not say what we mean for a variety of reasons:

Paradoxically, by not saying what we mean in the hope of avoiding conflict, we evoke it by speaking reactively or postpone its emergence by obfuscating.

To successfully avoid conflict, we need to speak with candor and tact. This means taking time to reflect and figure out what you want to say, why you want to say it, as well as how and when that message would be best received.

Conflict also emerges when we don’t do what we say; we don’t walk our talk or keep agreements. Our reasons for not following through could be because:

All three of these lead to conflict because we create expectations and then disappoint others or disrupt relationships and workflow. For example, have you ever told a co-worker you would provide the information he needs to complete his report and then not done it when you said you would? Or, have you said you would do something, even though you never intended to do it?

What do you do when this occurs? Do you pretend you did not agree to do what you said you would do? Or do you keep up the ruse, promising you’ll get to it soon, even though you never quite do? This is immensely frustrating to co-workers and family members. Over time, trust gets eroded and people find themselves at odds with one another.

Let’s use Arrien’s questions to describe how you might get more adept and consistent at saying what you mean and doing what you say.

Are there parts of you that are at war with one another? How is this internal war getting in the way of saying what you mean skillfully?

Internal congruence supports external congruence. In other words, being clear in your own mind about your intentions, emotions, and needs allows you to say what you mean more easily. Define your universal intentions and practice living up to them. When you fall short, acknowledge that you have and apologize for any harm done. Repeat as needed.

For example, one client lived in constant war with herself. She led an international organization with multiple stakeholders along with an international staff. Because she was an extremely introverted thinker, the amount of extraverted interacting the job required often exhausted her. Her internal war had lots of “shoulds” regarding others on one side and lots of “need for solitude to think” on the other. This led to acting abruptly with staff and overcommitting to meetings with stakeholders, both of which escalated the internal war. Understanding this internal conflict helped her to prioritize her time, including scheduling meetings with herself!

What is the major conflict you are experiencing at home or at work? Has the conflict arisen from not saying what you mean or not doing what you say?

Explore the conflict internally or with others with whom you are in conflict. Ask yourself, “How did I contribute to this conflict? How might others have contributed?” Be specific. “What have I done or said to create the clash? What have others done or said? How might I resolve this? Do I need to apologize and/or re-negotiate what I have committed to do?”

For example, another client often sat on what he wanted to say for long periods until he could not stand it anymore. Unfortunately, he would then blurt it all out in a tirade. His direct reports learned to avoid talking with him for fear of being the target of the blast. He is now working hard to not over-commit his time so that he is able to have the proactive conversations he needs to have in a timely manner.

Where are you creating misunderstandings in your life? Are they mostly at work or at home or both?

Investigate whether there is a pattern to how and where misunderstandings happen. Find out whether they are primarily caused by not saying what you mean or doing what you say. Reflect on why you think you are doing either or both of these.

For example, I used to hold back from saying what I meant both at work and with friends for fear of hurting others. When I looked at this pattern more closely, I realized that in addition to not wanting to cause others pain, I was also afraid of their potential anger or disapproval of me. So, I began practicing getting clear on what I needed to say and why, and developing the ability to express myself skillfully to avoid causing unnecessary hurt or harm.

Are you skillfully saying what you mean at home and at work? Are you doing what you say? If not, why not? What unnecessary conflicts could you avoid by doing both?