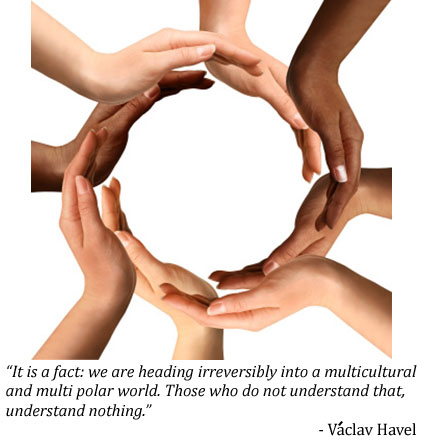 Last Wednesday in “Dealing with Difference” I describe “bonding social capital” and “bridging social capital.” I enumerate the serious consequences of too much of the former and make a case for more of the latter.

After many years of facilitating thousands of conversations in organizations and communities large and small, I am convinced that to understand and solve the complex issues facing us we need to interact more effectively with those who differ from us. In other words, we need to develop lots more build bridging social capital. This requires us to do four things.

First, we need to go out of our way. As the racial and ethnic composition of the United States becomes more diverse, we continue to live in separate enclaves. We don’t interact with those who differ from us as a normal part of our day. According to an analysis of the 2010 census, whites in 367 metropolitan areas across the U.S. live in neighborhoods that are at least 75% white. Blacks live in neighborhoods that average 45% black, 35% white, 15% Hispanic, and 4% Asian. The neighborhood percentages for Hispanics are similar. The figures shift some for Asians. Their neighborhoods average 22% Asian, 49% white, 9% black, and 19% Hispanic.

Segregation by income is also increasing along with income inequality. Over the past four decades, the percentage of poor families and affluent families who live in isolated or segregated neighborhoods has more than doubled (from 15 % to 31%). In addition, the affluent are more isolated from other Americans than the poor are. This is because fewer middle and low-income families live in affluent neighborhoods while more middle and high-income people live in low-income neighborhoods.

What are the implications of these various forms of segregation to how we talk with one another? Increasingly, we are becoming strangers and frightened of one another.

Second, we need to manage the tension between our competing instincts to protect ourselves and to connect with others. Engaging with those who differ from us—often perceived as a source of threat—is also the antidote to that threat. When we mindfully enlist the help of the prefrontal cortex we can consciously choose to engage with “strangers.” We can investigate how they are like us and increase our understanding of their personal story. When we develop a sense of relationship with those who differ from us, we feel safer. Feeling safe engenders a sense of trust, a desired to contribute, and sometimes even a willingness to make sacrifices. All of these enable us to work together effectively and reach goals that cannot be achieved by individuals working alone.

Third, we need to connect with and stay curious about “the other.” We keep ourselves from engaging with “the other” by avoiding contact or, if we have to interact, we disconnect from them even when we are with them. This triggers self-protection in them. They go on offense, defense, or withdraw. It is possible to make contact and maintain a sense of relationship with others, even in the face of differences that challenge what you believe. Our curiosity and ability to ask good questions can help us connect.