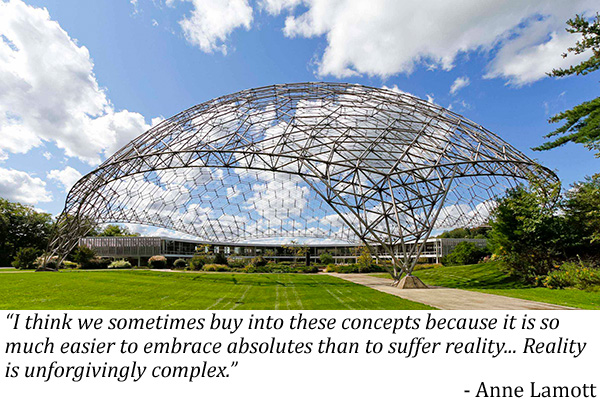 We are witnessing the logical result of people embracing absolutes in their minds and in their actions in Mali, Nigeria, Paris, Beirut, and the plane crash in the Sinai. These are acutely painful reminders of the travesties that are possible when human beings close themselves off to change and mindlessly cling to beliefs about the way the world is “supposed to be.”

My rigidity and reactions to the beliefs of others is not in the same league as these, but they are in the same universe. I know I experience intolerance, even anger, when someone puts forward ideas that are anathema to mine. Sometimes I even imagine wanting to scream or slap them.

When we embrace certainties or absolutes, we pay a price. We close ourselves off from possibility and shut the door on what good we might do together. Once we believe we “know” it is hard for us to hear each other and consider different points of view. We forgo experiencing the energy and vibrancy that listening to and learning from others generates. Clinging to certainty—what any one of us thinks is “the truth”—pretty much guarantees that we will not be able to move forward together; we will not be able to satisfactorily solve tough issues; and we will remain in a local or global stalemate, hobbled from progressing.

Opening to change, however, presents a paradox. On the one hand, the brain loves certainty and predictability, i.e., no change. On the other, it is a living organ with a unique ability to change itself. This is called neuroplasticity. Despite our dynamic nature, we still try to hold the world and our beliefs about it still. It feels safer this way. But this is a recipe for suffering and mindlessness, because it is not how the world is or how we are.

To be alive means to be in a constant process of change. The only thing that is certain in life is that it is impermanent and that things change.

Five telltale signs that we are attached to our version of “the truth” include:

When we separate who we are from beliefs, positions, or ideologies or at least hold them more lightly, we reduce polarization and begin to build bridges across that which divides us. We might even begin to see the differences among us as assets, things from which we can learn and craft new solutions for our communities and organizations.

The past becomes the future through our current beliefs and conversations. Do we want more of the same? Or do we want to embrace the philosophy of architect and inventor Buckminster Fuller who wrote “I am not a thing—a noun. I seem to be a verb, an evolutionary process—an integral part of the universe.”