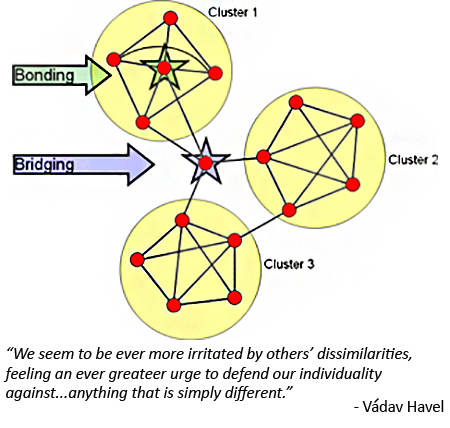 Our survival in the past depended on being part of a family or tribe. Now it depends on relating effectively with those we perceive as being outside our tribe or group. To solve the complex issues we face at work and in our communities, we need to work with people with different backgrounds, experience, areas of expertise, and points of views. In other words we need to build social capital—social networks, norms of reciprocity, mutual assistance, and trustworthiness—with people who differ from us. This is called “bridging social capital.”

The political polarization in the United States and the wars being waged around the world over religious beliefs, land use, and political control, suggest we have more than enough of another kind of social capital: “bonding social capital.” This develops naturally among people who have something in common like goals, values, or points of view. The upsides of bonding social capital are that people have a sense of belonging, they can advocate for common goals and get things done they could not do as an individual. Political parties, special interest groups, professional associations, and civic organizations like the Rotary Club are examples of the forms that bonding social capital can take.

There are serious down sides of having too much bonding social capital.

First, if we get accustomed to talking primarily with people who think like we do, it becomes harder, even impossible, to talk with those who do not. Some tragically resort to violence instead of talking with those who differ from them.

Second, when groups bond, they cohere around beliefs, goals, or values. Such groups reward conformity and sometimes punish the lack of it. Multiple studies confirm that conformity discourages different perspectives and crushes dissent, the very ingredients we need to understand and solve the complex issues dividing us.

Third, homogeneity creates an “us” and a “them.” This might be terrific for sporting events but wreaks havoc in organizations and communities. The safety of bonded groups can lead us to stereotyping other groups; we make up stories and develop beliefs about “them.” These beliefs become more real to us than our direct experience of them. We get antagonistic towards others and slip into demonizing “those other people.” This fragments communities.

Fourth, difference can lead us to deny the humanity of others. When we meet people who obviously differ from us (height, weight, race, gender, age, sexual orientation) or who do so more subtly (different functions or levels in the hierarchy of an organization, or from different economic, social, or political persuasions), we can feel unsafe. In fact, such differences can trigger the survival instincts in the brain. When we add a perception of threat to beliefs we hold (“all men are…” or, “all XXX are,” or, “everyone in management is…”), we start to turn “others” into objects. Studies indicate that in extreme forms of prejudice, we can go so far as to deny those who differ from us their humanity.

Unless we engage effectively with people who differ from us, possible solutions are limited to our current points of view. Talking with likeminded people creates echo chambers in which our beliefs and ideas get reinforced through repetition. This makes us surer of our ideas or positions than we probably should be. In this way we blindly continue on the path we are on and recreate the past at a time when we sorely need to forge a new future.

To engage effectively with those who differ from us, we need to make a conscious choice to do so and to mindfully manage the self-protective parts of the brain when we do. The benefits are invaluable. Engaging with those who differ from us dispels the myths we have about “those other people,” thus increasing our understanding of the issues at hand and revealing common ground where we might have assumed there is none.

Next week I describe the four requirements for building bridging social capital.

2 thoughts on “Dealing With Difference”