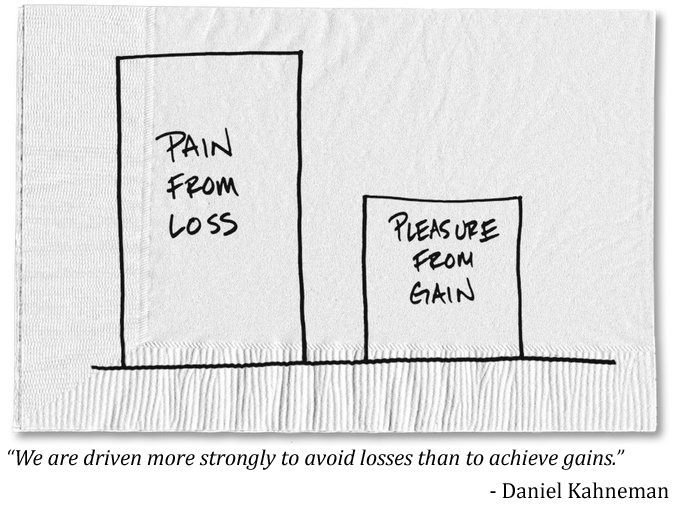 Multiple studies substantiate that we humans feel the pain of loss more keenly than we do the enjoyment of gain. Remember Lance Armstrong? He apparently abhorred the pain of loss down to the core of his being. “I like to win, but more than anything, I can’t stand this idea of losing.  Because to me, losing means death.”  He did anything he could to avoid losing. After a long doping scandal, Armstrong was stripped of his seven consecutive Tour de France wins in 2012.

This form of cognitive hijacking—loss aversion—affects interactions at work and in our communities. It makes it difficult to reach agreements and move beyond the “status quo,” regardless of how harmful or insalubrious the current state is. When faced with giving a little to get a little, we’d rather not give in order to get.

At work, when asked to delegate decision-making authority, overworked managers balk at the prospect of “losing” positional authority for the gain of less stress and more committed and engaged employees. Employees resist working with colleagues in other departments to improve cross-functional work processes for similar reasons: they don’t want to lose control of their part of it or any potential rewards.

In communities, elected officials and senior governmental administrators are unwilling to let go of the wheel to convene collaborative public engagement processes which often result in better decisions and more effective implementation. Residents argue with one another over whether and where to establish safety zones, concerned that it might take a little longer for them to get to work even though the zones will likely save lives, perhaps even theirs.

The human brain’s desire for certainty exacerbates loss aversion. As the saying goes, “Better the devil you know than the devil you don’t know.” Because of this we frequently give more weight and attention to the present at the expense of future possibilities.  We find it difficult to give up what we already have for better options, especially when the losses appear larger than the expected gains.

The challenge is to help everyone understand and appreciate how the benefits of change outweigh the losses.

To help offset loss aversion, incorporate a specific step in meetings at work and in your community in which you:

In addition, conduct a thorough “cost/benefit” analysis of any potential decision or action in all dimensions, not just financial. Use a list of stakeholders to identify what each stakeholder or stakeholder group might lose or gain with each of the potential solutions before determining which ones you want to proceed with. Imagine any potential unintended consequences that might eventuate for the organization and relevant communities as a whole. (How might this kind of evaluation have affected the decision to save money by changing the source of water for Flint, Michigan?)